Figure of the week: Increasing access to electricity in sub-Saharan Africa

This month, the custodian agencies of Sustainable Development Goal (SDG) 7 released a joint report, “Tracking SDG 7: The Energy Progress Report,” which examines the progress made toward the achievement of SDG 7, “ensure access to affordable, reliable, sustainable and modern energy for all” by 2030. While progress has been made toward increasing electricity access globally—441 million more people have electricity in 2019 compared to 2010—the report highlights how the world is not on track to achieve any of the targets under SDG 7. According to the authors, the trajectory has been further diverted due to the COVID-19 pandemic that places additional burden on supply chains and consumer’s income, and is set to increase the deficit of electricity access in 2020. Moreover, write the authors, the pandemic highlighted the importance of access to reliable electricity in facilitating the delivery of vaccination doses that rely on ultracold storage and in the general success of public health programs.

According to the report, the overall number of people without electricity access has steadily dropped worldwide, largely driven by the shrinking deficits in Central and Southern Asian countries. Notably, as seen in Figure 1, the 20 countries that comprise the smallest share of population with access to electricity in 2019 are all located in sub-Saharan Africa. At 7 percent, South Sudan had the lowest access to electricity in 2019, and countries like Chad, Burundi, and Malawi had slightly greater access. Figure 1 also shows improvements in access over 2010-2019 within this group of 20 countries. Uganda has the greatest access to electricity at 41 percent and experienced the greatest improvement in electrification, with an average annual growth of more than 3 percent. While all 20 countries are far below the world average of 90 percent for electricity access, half of them had much greater overall annual growth than the world average. 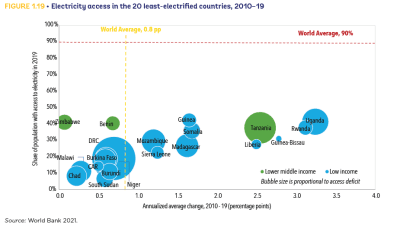 Overall, sub-Saharan Africa accounts for 75 percent of the world’s population without access to electricity, and, as seen in Figure 2, the region’s access deficit has increased from 556 million people in 2010 to 570 million people in 2019. Importantly, though, while the number of people without access to electricity has overall increased within sub-Saharan Africa, from 33 percent in 2010 to 46 percent in 2019, the share has actually dropped due to rapid population growth. Such a trend indicates that electrification is lagging behind population growth in many places, particularly in countries like the Democratic Republic of the Congo, Nigeria, and Malawi. However, in countries like Kenya and Mali, advances in electrification outpaced their annual growth in population.

The authors highlight the importance that policy and regulatory framework has in enabling such large improvements in electrification in countries like Liberia and Guinea-Bissau, and even in countries like Cameroon that have faced conflict and violence within the time period. The authors argue that support for electrification is an imperative component of recovery packages and should particularly focus on mini-grid and off-grid electrical sources that play a key role in achieving universal access—even in rural, conflict-prone areas of Africa. Such developments depend mostly on startups and small-to-medium-sized businesses that have suffered under pandemic-related lockdown provisions and disruptions in their supply chains.