[Link to the scene in the movie Any Given Sunday.]

Marcello Lippi, coach of the Italian 2006 World Cup winning team, was once asked what is the most important quality he looks for in a player. His response:

“Intelligence… if a player has intelligence the rest will follow.”

Intelligence is not a personal characteristic we often  associate with ‘football’ers on either side of the Atlantic. However, the authors of a recent publication by Artificial Intelligence (AI) researchers at DeepMind may differ on this point. The study brings home the hidden complexities of the simple sport often referred to as the ‘beautiful game’.

Game Plan: What AI can do for Football, and What Football can do for AI

The team at DeepMind, the group behind AlphaGo, have partnered with Liverpool FC to analyze the Terabytes of data collected on individual players through high precision wearable tech, and computer machine vision. Despite the rapid advances in data analytics, the paper perfectly illustrates several common challenges faced by AI practitioners.

To begin, there is the challenge of creating consistent and reliable (mathematical) player-game representation models. More specifically, the subtle footballing nuances which may vastly alter the subconscious/off-ball movements, and decisions taken by players.

In Go, where DeepMind successfully managed to overcome the worlds top (human) player, the game rules are clearly defined. The combination of possible moves is unbound, which makes it a computationally taxing problem for traditional algorithms. In football (soccer), the rules are relatively simple, yet the possible combination of moves or passes available to each player is (theoretically) unlimited. As spectators, we can anticipate the next movements in a game despite the large set of possibilities. However, this is only true for a couple of seconds. The fast unpredictable nature of football makes it exciting to watch… well, at least for most of the world.

AI in Football… Hype or Reality?

Based on this research publication, we believe we are still a (very) long way from replicating a breakthrough in football to match the success of AlphaGo. Football (soccer) is, perhaps, not the easiest choice of sports to begin with by AI researchers. For now, DeepMind appears to be the greater beneficiary from the partnership with Liverpool FC.

At present, DeepMind can identify a players role within a team using a subset of a 14-parameter (non-GPS data) vector representations of players stats. For example, using the number of long and short passes made by a player.

So what did DeepMind learn? 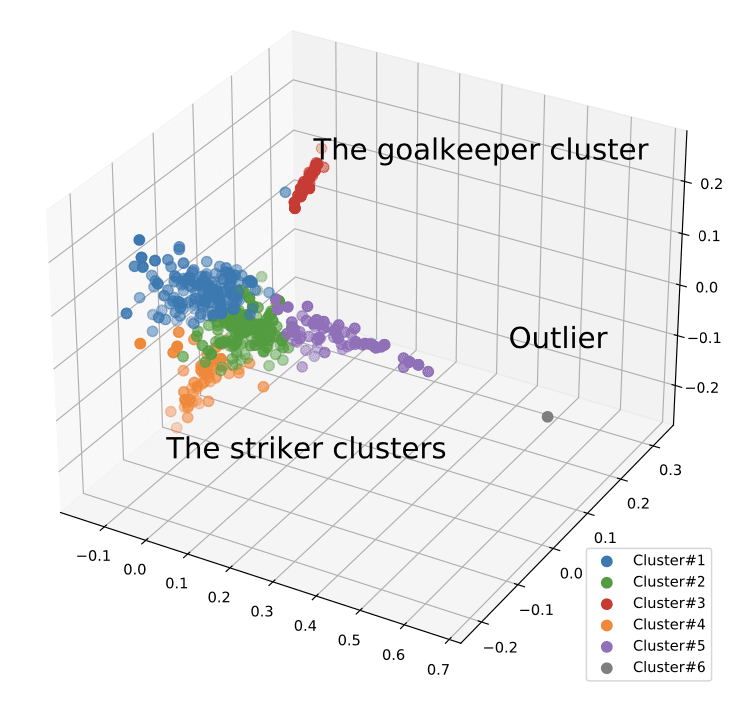 With individual players shown relative to others…

2. There is no clear advantage in a penalty striker going for the natural vs non-natural side…

For example, when the ball is played back towards the goalkeeper, players will move upfield quicker than in a scenario following an alternative forward pass. The paper authors use Generative Trajectory Prediction Models (‘Ghosting’), to predict players movements, as shown in the figure above. It is unlikely if this milestone has been successfully surpassed.

Football fans and players will no doubt identify the final point (above) presents a gross oversimplification of the course of possible play.

In conclusion… the beautiful game is even more truly beautiful, and humans are truly incredible.

According to Betfair.com, England are (72%) favorites to overcome Denmark (28%) in the semi-final match tonight in Wembley (London). The sports betting pros expect the odds to shift a little upon the England team lineup being announced.

Here are the latest markets for tournament winners…

Denmark‘s remarkable Euro 2020 story is reflected in the implied probabilities rising from less than 1% pre-tournament to ~10% at present.

Denmark goalkeeper, Kasper Schmeichel’s, snipe at a reporter is more reflective of the historical stats.

Please complete our markets Survey: Belgium, Bitcoin, Big Tech, and Bonds. It takes 1-minute to complete, and the results will be shared as previously.