In Myanmar, protests are increasing despite growing violence from security forces. In Ecuador, political tensions remain high ahead of April’s presidential run-off election. Italy could follow the UK’s first-dose strategy. Meanwhile, Pakistan’s action plan against money laundering and terrorism financing will be reviewed this week, the EU will struggle to reach consensus on Russia, Brazil’s oil producer Petrobras will choose a new chief executive, and South Africa will present the 2021/22 budget. 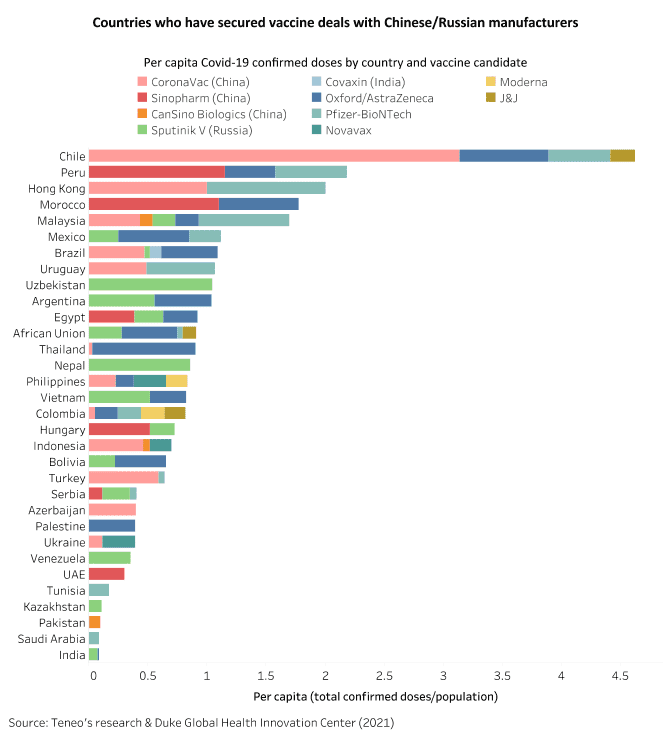 China, Russia, and India continue to use the Covid-19 vaccine for political, diplomatic, and economic purposes, especially across developing economies. The African Union’s vaccine task force last week secured 300mn doses of Russia’s Sputnik V, while India’s Bharat Biotech, which produces the Covaxin vaccine, is pursuing vaccine approval in over 40 countries. Against this background, G7 leaders such as Emmanuel Macron and Boris Johnson have instead that rich countries should start sending more vaccine supplies to developing countries – not only for moral and epidemiological reasons, but also for geopolitical purposes. However, the Biden administration appears reluctant to increase these efforts until a higher proportion of Americans has been vaccinated. At the same time, there is increasing debate about whether certain intellectual property rights should be waived for Covid-19 vaccines, as some developing economies (South Africa, India) have suggested.

A general strike drew hundreds of thousands of protesters into the streets Monday in the largest demonstrations so far since the coup, further escalating the protests against the junta. Two protesters were shot dead on Sunday in the city of Mandalay, although this does not seem to have dissuaded demonstrators. The anti-government movement has some momentum and more paralyzing strikes may be on the way, but which also increases the possibility of a severe government reaction. The economic strain is also likely to increase as businesses and banks shut down.

Electoral tensions will remain heightened this week after the National Electoral Council (CNE) announced on 21 February the final line-up for April’s presidential run-off. The conservative Guillermo Lasso narrowly beat the indigenous movement’s Yaku Perez to come in second behind the leftist Andres Arauz, former president Rafael Correa (2007-2017)’s protégé. However, Perez has filed legal challenges against the CNE, which controversially now faces an audit of its digital voter database. Perez is also fronting a march of his supporters, which will arrive in Quito tomorrow, 23 February. Perez’s contestation is more about posturing than getting the results overturned, though some of his rhetoric makes any alliance with Lasso more difficult. Arauz, meanwhile, will up his efforts to demonstrate his moderation and independence from Correa, both of which are highly moot.

Premier Mario Draghi’s cabinet is expected to extend a ban on travel between Italy’s regions by a month and to discuss new anti-pandemic measures during a meeting on 22 February. Rome may follow the example of the UK’s government and proceed with a mass vaccination using all available doses, without setting aside some of the vaccines for second shots, to accelerate the process.

The Financial Action Task Force (FATF) – an intergovernmental organization which combats money laundering – will determine this week whether Pakistan will stay on the FATF’s grey list or will slide further into the blacklist. Being placed on the blacklist would mean that most countries would be banned from having financial dealings with Pakistan. The FATF will judge Pakistan’s progress on a list of actions recommended to curb money laundering and terror financing. Pakistan claims it has complied with most of the conditions set down by FATF in a previous meeting.

The Ministry of Internal Affairs and Communications (MIC) announced on 22 February that 13 ministry officials had been treated to meals by the son of Prime Minister Yoshihide Suga, an executive at a telecommunications company.The ministry has already punished 11 for violating ethics rules regarding accepting gifts from businesses that the ministry regulates. The controversy will likely continue to dog the prime minister, as opposition lawmakers have sought more information from the ministry and are calling for the prime minister’s son to face questioning himself as they seek to find out what the prime minister himself knew about these activities.

EU foreign ministers are expected to reach a political decision to impose new sanctions on Russia during a Foreign Affairs Council meeting 22 February. The EU will likely target individuals directly linked to the arrest and sentencing of the opposition activist Alexey Navalny and the suppression of continued protests across Russia. The bloc is expected to utilize its new human rights sanctions regime adopted in December, which foresees travel bans, asset freezes and limits on making funds available in the EU for designated individuals or entities. The final decision on sanctions needs unanimous backing from all EU member states and could be taken during the EU leaders’ summit scheduled for 25-26 March.

Last week’s dismissal of the president of state oil company Petrobras and his likely replacement by another army general will dictate the course of events this week. Markets have reacted strongly to rising concerns over interference in the management of the publicly traded company. The board of the company should ratify President Jair Bolsonaro’s new appointment on 23 February. Bolsonaro’s appointee, General Joaquim Silva e Luna, will certainly be called to clarify what he meant when he said that state-controlled companies should be “fully integrated into society” and “contemplate social questions.” It remains to be seen whether President Bolsonaro will deliver on his promise to lower the price of gasoline by at least 15% or continue to reshuffle top positions in the energy sector, as he committed to do last week. In parallel, the future of Economy Minister Paulo Guedes has become once again questionable, raising additional concerns about the government’s reform agenda. The week also should see whether the emergency assistance will be reinstated in compliance with current fiscal rules or under a newly negotiated state of calamity.

Finance Minister Tito Mboweni is due to present the 2021/22 budget on 24 February. South Africa’s near-term fiscal outlook has improved slightly relative to last October’s disastrous Medium-Term Budget Policy Statement (MTBPS), thanks to better-than-budgeted tax revenue. Despite short-term relief, the sustainability of the economic recovery is in doubt and reform momentum will be essential to begin to address South Africa’s mounting growth and debt troubles. Mboweni’s ability to hold the line on spending cuts, particularly a planned public-sector wage freeze, will receive scrutiny.