The US and UK governments have criticized China for allegedly interfering in the WHO investigation into the origins of Covid-19. Italy’s new PM will appear before parliament this week to present his program. Meanwhile, India’s farmers continue to protest against new market-friendly agriculture laws, Slovenia’s center-right government has survived a no-confidence vote, the outcome of Ecuador’s presidential elections vote recount is expected today, and France could announce changes on its military strategy in the Sahel region. 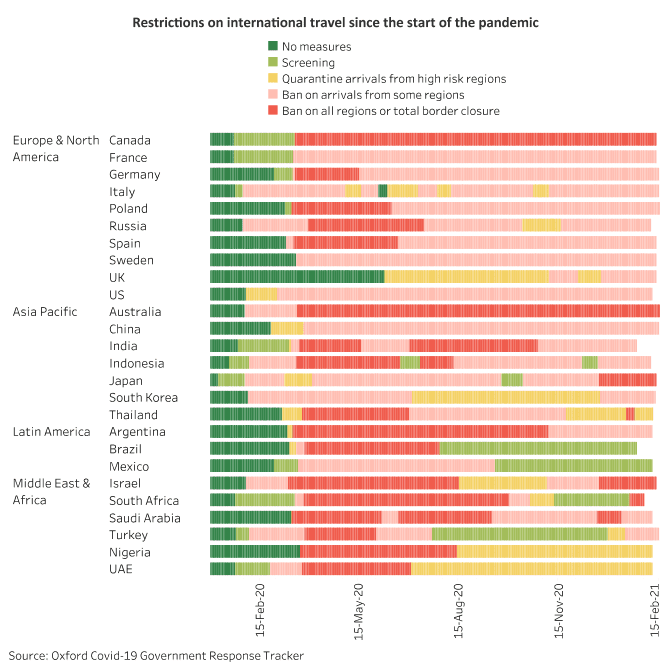 Nearly one year after the start of the Covid-19 pandemic, restrictions on international travel are still very stringent in most countries across the globe. Even countries such as the UK, which was particularly lax on border restrictions in the early months of the pandemic, have now introduced hotel quarantines for travelers returning from high-risk countries; Canada will also introduce hotel quarantines for air travelers next week. At the same time, Germany’s partial closure of borders with the Czech Republic and Austria’s Tyrol region challenges the EU’s coordinated approach on travel restrictions. These restrictions are likely to remain in place in the coming months, especially if access to Covid-19 vaccines continues to be a problem in many low-income countries and the pace of the vaccine rollout continues to diverge substantially across nations. It is not a coincidence that countries with so-far successful vaccination campaigns such as Israel and the UK have also introduced the strictest restrictions on international travel. In the second half of the year, less restrictions within countries with successful vaccination campaigns might come at the cost of continued restrictions on international travel.

The US and UK governments both criticized China over the weekend for allegedly failing to grant sufficient access to World Health Organization investigators who recently concluded a monthlong visit to Wuhan. This prompted an angry response from China’s foreign ministry. WHO Director-General Tedros Adhanom Ghebreyesus said earlier that all hypotheses about the origins of Covid-19 remain open, though the organization has dismissed the possibility that the virus escaped from a lab.

Prime Minister Mario Draghi will present his program’s guidelines to parliament this week. The government will be fully operative once it has passed the confidence votes in both the Senate and the Chamber of Deputies. The votes will take place on 17 and 18 February.

Farmers protesting against three federal laws encouraging marketization of farm produce are expected to block trains nationwide for four hours on 18 February. Despite a government offer to negotiate, protests are likely to continue.

As expected, the center-right coalition government led by Prime Minister Janez Jansa (Slovenian Democratic Party, SDS) survived the motion of no-confidence on 15 February. The motion was supported by 40 deputies – six short of an absolute majority (46) needed to overthrow the government. The center-right cabinet now has good chances of serving until the end of the term in mid-2022. Jansa will likely continue to exert pressure on independent media and civil society in order to tighten his grip on power, but his minority government will face headwinds to advancing controversial reforms through parliament.

A vote recount to determine who came second in the 7 February first round of the presidential elections is supposed to get underway from today. The official count has the conservative Guillermo Lasso on 19.74%, narrowly ahead of the indigenous movement’s Yaku Perez, who is on 19.38%; that amounts to a difference of 33,000 votes in an electorate of over 13mn. The two candidates met on 12 February and agreed that the National Electoral Council (CNE) should to a recount in 17 provinces. The recount is expected to last a fortnight. However, over the weekend, Perez accused Lasso of backsliding on the agreement. The more tensions deepen, the less likely any kind of electoral alliance against the leftist Andres Aruaz becomes.

France is expected to announce a major recalibration of its force posture across the region during a 15-16 February G5 Sahel security summit. The French government already indicated that it would withdraw the extra contingent of 600 soldiers it deployed following the January 2020 regional security summit. That would reduce its regional anti-terror operation ‘Barkhane’, launched in 2014, to its original size of 4,500 soldiers. Yet France may also announce to reduce its military footprint further in the medium term, whilst urging European and regional partners to increase their contributions. Particular emphasis will likely be placed on accelerating existing efforts of international partners to train and equip regional security forces.